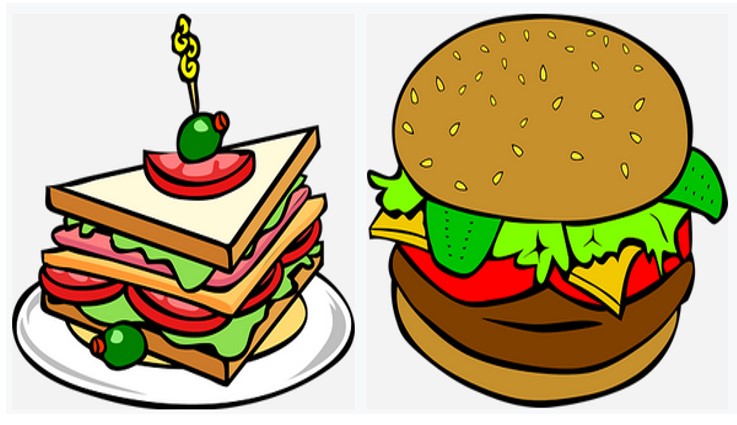 Have you ever gone to a restaurant and wondered whether to order a sandwich or a burger? Now, we want to simplify your task by demonstrating the difference between the two.

What is a Sandwich?

A sandwich is made of two slices of bread and filled by placing meat and vegetables between the slices. Though this type of food is as old as bread and meat, the name “sandwich” was adopted in the 18th Century ‘only’ for Montagu, the 4th earl of Sandwich.

Today, it has been incorporated into most cuisines because of the simplicity of preparation, variety, and portability. Indeed, any type of bread and food that people fancy can be used to prepare it. The British tea sandwiches are prepared with thin slices of bread filled with cucumber, fish paste, and tomato.

In the U.S., the club (sliced chicken/turkey, bacon, lettuce, and tomato), and Reuben (corned beef, sauerkraut, Swiss cheese, and Russian dressing) sandwiches are the most common.

What is the Difference between a Burger and a Sandwich Step by Step?

The main difference between the two is that a sandwich is prepared by placing the filling of vegetables and meat between two bread slices (preferably flatbread), while a burger is cooked by putting the fillings between a bun that has been sliced into two.  Therefore, the primary difference of that in the case of sandwich, flat slices of bread are used for binding while a burger uses a bun.  Other differences include:

Unlike a burger, a sandwich can take many shapes. The common one is the rectangular/ square outlook that simply takes the shape of a slice of bread. However, you can also get a triangular shape made by making a diagonal cut on the rectangular sandwich. If you go for the three-sided option, it looks bigger and more attractive because of the smooth cut.

How to Make Sandwich Step by Step?

Today, making a good sandwich is indeed simple; throw a couple of foods between two slices of bread. However, making a great one will require some bit of skills and imagination. Here are the steps to follow:

To make the best sandwich ever, you should consider using an unsliced loaf. Then, cut it into slices. Though you can use the pre-sliced bread, it is not recommended because the slices get soggy too fast. Indeed, you could also bake own bread.

After cutting the bread into slices, apply mustard on the bottom side. Consider using the well-rounded mustard because it works perfectly well with meat that you are about to add. Placing it on the lower slice means you will feel it more because it will be closest to the tongue’s taste buds.

Immediately after the mustard goes the meat. This could be roast meat, cured meat, or ham. Indeed, you could even use all the meats. On top of the meat, you should add the cheese. Add a layer of Swiss cheese in the ratio of 1:4 of cheese to meat.

Now add thinly sliced red onions and tomatoes. You should consider dipping the raw onions on pepper, salt and red wine for about 5 minutes. Note that the cheese underneath holds the veggies from sliding on the meat layer. On top of the onions and tomatoes goes the loose-leaf lettuce.

Note that all the ingredients in the above steps were added on the lower slice of bread. On the upper slice, smear some mayonnaise. It will go very well with the lettuce. Now, place the upper piece on the lettuce. Press a little, and tilt on one side for a few moments to let tomato juices and vinegar escape.

How Many Types of Sandwiches?

The appeal of sandwiches and the ease of preparing them have seen the original designs evolve to more than 50 models. Here are some of them:

Other types of include grilled, tea, buffet, French, and double-decker.

What Type of Sandwich Useful for Humans?

Though there are many types of sandwiches out there, the main question that many people ask is: “Which is the best?” The ideal option is the one made with healthy ingredients. This means low-calorie, calcium-rich, low-fat and omega-3-rich options. A healthy snack is very helpful in cutting weight, strengthening the body’s immunity, and preventing heart-related diseases.

The good thing is that when it comes to sandwiches, the options for the fillings to use are pretty many. Some of the healthy ingredients to consider include whole-grain bread, lettuce, egg salad, zucchini, avocado, chicken, eggs, peanut butter, fish, black beans, and pumpkin among others.

If you want to enjoy a yummy snack for breakfast, lunch, or when going out, sandwiches have no equal. Well, you can even prepare them at home. To get more, make sure to go for the low-carb and omega-3 rich ingredients.